Ads are a funny thing. As in I don’t look at them at all, yet still somehow expect them to work for me to sell my book. Perhaps it’s just hubris that allows me to think I’m unaffected by ads while other (read: lesser) people succumb to their influence. My former boss Tom Gerace teamed with screenwriting guru Robert McKee (he was played by Brian Cox in Adaptation, which is kinda a dream for me now) and wrote Storynomics, which basically boils down to how ads have shifted away from the interruptive advertising paradigm to a narrative structure that fits screenwriting like a glove.

Yet with all this information, I still find myself putting together some new Facebook ads.

And yeah, I’ve been burned by them before, but I also can’t say I actually fully invested myself in them. Yes, I’d read Help! My Facebook Ads Suck, which did spell out the basics and how to build an audience, create A/B testing, and why you should use stock images rather than your book cover. I do recommend this book, and am rereading it now as I put my new ads together.

But as I was saying, I half-heartedly followed H!MFAS but got burned on my few ads I did put out. Part of this had to do with the fact I was running them during a $.99 sale, so the return on investment (ROI) was naturally really low. But even then, I had horrible ROI, despite having a pretty high relevancy (you’ll have to read the book to know what I’m talking about there).

I have come to the conclusion I faltered there for two reasons: 1) My images sucked. 2) My ad copy sucked.

I won’t waste space here showing what my images were, nor my copy now that I think about it. Just know they were bad and I took a bath on my ads. But now with book three coming out, this shifts the ROI because there’s a higher read-through rate, so it starts to become more profitable to advertise.

Which means I need to get all my ducks in a row.

I’ve been following Andy Peloquin for a while (I even appeared on his The Fantasy Fiends podcast a while back), who has had a huge amount of success with the relaunch of his Hero of Darkness series, which he delved into in his appearance on the Science Fiction and Fantasy Marketing Podcast. Facebook ads were only a small part of his success on this series, but let me emphatically say that this man has cracked the Facebook ad copy conundrum. Here’s an example:

That there, that’s FB ad gold, from the tagline on down and what I’ll be modeling my upcoming ads after. And while looking his ad over, I realized how much writing ad copy is like writing a tagline/ logline. You need a great one-sentence to grab attention as part of the tagline, then a bit longer logline to tell the audience both what the book is about and why they should care. And, in both, succinitity (totally a word) is key.

H!MFAS goes into four writing strategies for your ad copy, and I’ll be employing two of them here: 1) Character-Based, 2) World-Based (he actually argues it is plot based, but I’m coopting that as world since I’ve been complimented on my worldbuilding and just got that great map)

Andy was kind enough to even go through and work with my copy, which consisted of cutting out about 40 words. But before I get to those, I should probably point out that I’m targeting the character-based approach more towards women while the world-based approach to men. I will definitely be seeing how each image/ copy play with BOTH genders, but will be putting more money into the male/ female targeting based on that old adage that women care more about characters and guy are more plot driven. Maybe my numbers will say this is wrong, but I doubt it.

So here’s my character-based copy, which will be paired with the two following images. I really focus on the multiple roles Marta has played in her life and the fact she was raised to serve one side but fought for the other, which is why I went with the woman with two faces. The other image is something I’m still playing with, in that I had someone make images to represent each book title in the series. There were four of them, which matched up with my tagline of Spy. Traitor. Soldier. Savior., so I thought I’d see how it goes. I’m betting it won’t play well at all, but that’s the great part of ads: When something doesn’t work, you can kill it on the cheap (the process is explained in H!MFAS). 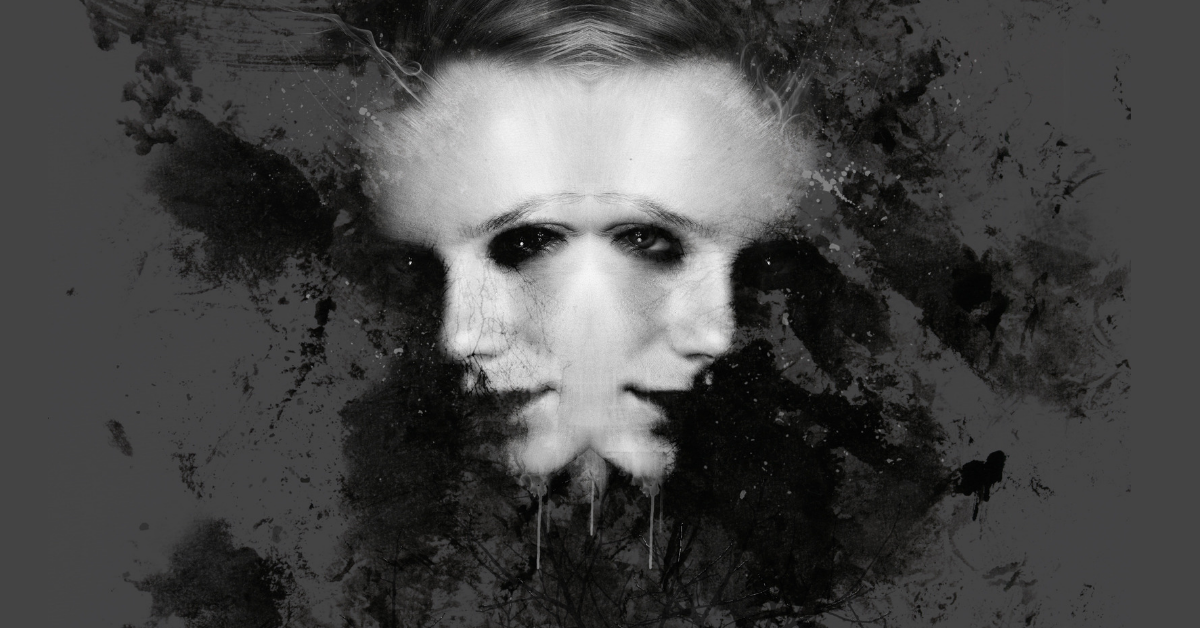 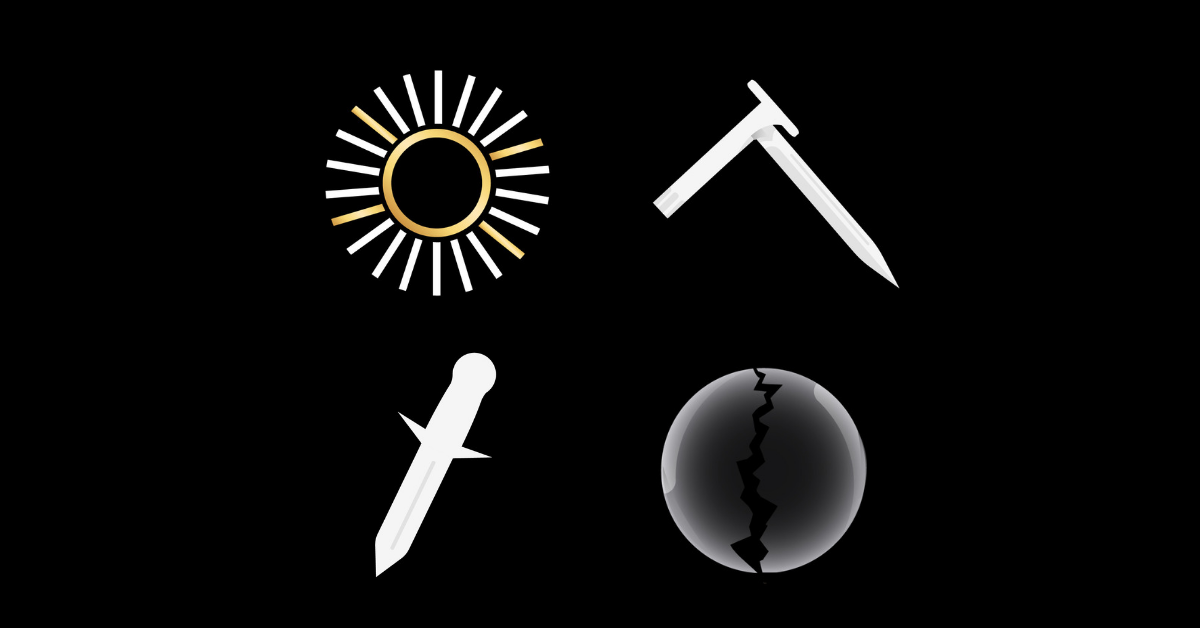 Trained since childhood to hone her unnatural abilities to become the perfect spy for the East, Marta Childress instead fought for the West in the civil war that tore the nation of Newfield in two. But by her bloody hand, a tentative peace was forged.

Yet now Marta must deliver a catatonic child deep into enemy territory to assassinate the girl’s father. True, she may plunge the nation into a second civil war. But it’s her last chance to earn her family’s forgiveness.

And now for the world-based, which I’m playing with the irony (which we remember from our lesson on loglines is essential for a pitch XXX) that everything should be perfect in this world yet it just suffered a civil war. The second irony is that Marta’s former home is now enemy territory. As images go, the first isn’t the finished product, but I wanted the map that looked like it was on fire, Bonanza-style. It hasn’t turned out perfectly yet, but that’s the general gist. The cannon is a stock image that looks cool (IMO) to catch attention and hopefully get across the non-traditional nature of the fantasy setting. 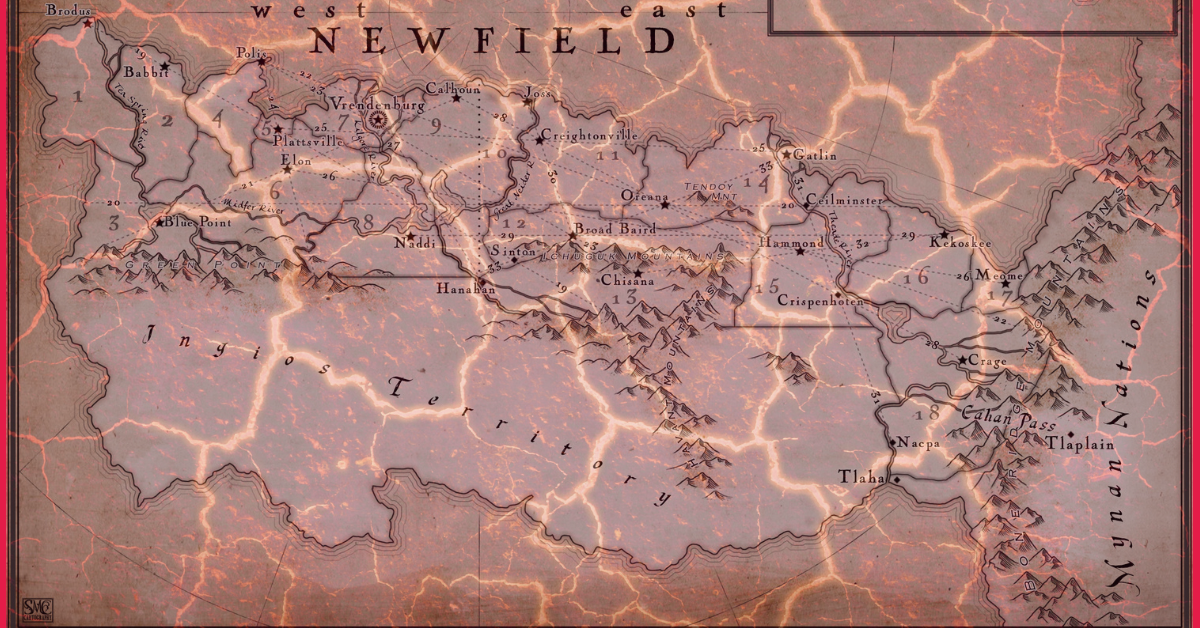 Enter Newfield, a land where flying trains crisscross the continent. Where Weavers fashion mindless manifestations to work the plantations, Renders keep the peace with glass daggers, and Tinkers provide free energy for all.

And war will rage again if turncoat Marta Childress cannot deliver the catatonic daughter of a renegade inventor deep into the enemy territory that was her former home. Will she ensure the fragile peace or let it all burn?

As you can see, both copies end with the book title and a quote saying how good it is (Social Proof as it’s called in H!MFAS). They’re also both under 125 words, which still feels a bit long. But if screenwriting has taught me anything, it’s how to boil hundreds of pages down to a single sentence.

And wow, I thought I’d knock out everything about designing the ad in this initial post, but we’re already over 1,200 words, which I find is a cap when it comes to readers’ attention. So we’ll get into the targeting in more detail next time, then return to see how well these ads have fared.

The Importance of Characters

Chekhov’s Gun is a Double-Edged Sword