As this ever so clever title has probably hinted at, I’m going to be taking a two-month hiatus from blogging here. As if there wasn’t already a fairly shoddy and haphazard update schedule already in place. But I thought I’d inform all three of my readers as to the why of it.

I’ve mentioned before how we have a new addition to the family, which I compare to being in a terrible wreck and losing a limb: It is a hugely life changing event that will forever divide your life into a before/ after. This is not to say you still can’t do all the same things you used to do. If you used to climb mountains, you certainly still can without a limb. Thing is, you’re going to have to learn how to do all those things that used to be so easy over again. And chances are those simple tasks are going to take twice as long as be twice as hard.

Have I sold each and every one of you on having children yet?

Relearning how to do my life has actually been pretty good. I still maintain my dayjob working from home as I take care of the little monster, and even still workout for 20 minutes a day during his naptime. The wife gets home a few minutes after 5 pm, at which point I make dinner and we commence to shoveling it down our throats before his mood changes. This means I don’t sit down to do any actual writing until 7:30 or so, and I have to be in bed around 11 if I’m going to be any use the next day (because I’m old now).

This leaves me about 3.5 hours for writing, which I used to use for my blogging as well as novel writing. And, to my great surprise, I actually enjoy blogging much more than I expected. However, with the birth of Sigil, all that’s changed (does that make it my second child?) We’re still currently trying to get the word out, which means guest blogs at the larger websites that are kind enough to host us. As I put together most of the ideas for these blogs, they’ve fallen to me. Yes, they’re taking away from my personal blogging, but I think they serve me better in my career than this site here. People will see the Sigil posts (and therefore me) much more on those sites like Booknest, Fantasy Book Critic, Bilblisanctum and the like than all three of you whose lives will be upended by my brief hiatus.

That said, I only have eight more ideas for guest blogs that are Sigil-centric. As I relearn how to do my life, I’ve found I go from 2-3 blog posts a week to only being able to write one on the weekend. I figure eight more weekends to work on these Sigil posts, and then I’m free to do my own blogging again.

So I guess that means I’ll see you folks again sometime in early August.

I'm recycling old pictures for this post and figured this is an appropriate one for some reason.

And yes, I know I have 3.5 hours free in the evening, but I’m reserving those for finishing Sol’s Harvest and finally bringing Marta et al to their dramatic conclusion. As of the writing of this post, I have finished the outline for book three (The Glass Dagger), and should finish up the beat treatment for book four (The Shattered Sphere) by the end of the month. I even have photographic proof! 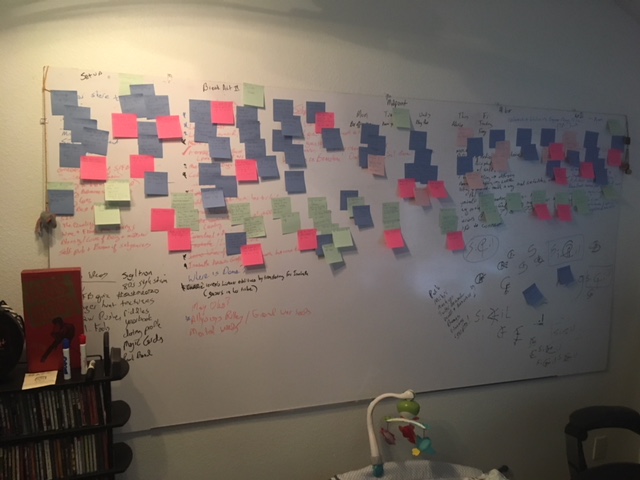 ​Generally I’ve found I can knock out the actual rough draft of a book really quickly once the beat treatment is in effect. I’ve also been working on my writing speed. Used to, when I had all the time in the world during the day, I’d faff about and not really get into my writing flow until two hours or so into the process, at which point the words would finally flow. I’ve knocked out 5-8 thousand words on days like those, but those were 8-12 hour days. Now with only 3.5 hours each night, I’ve been focusing on my writing speed through some sprints. Yeah, they’ve gotten my fingers more fluid, but more than anything else, they force me to get into the flow like it or not rather than eventually getting up to speed at my own pace.

If I can stay on the schedule I’ve set for myself and keep my writing speed up, I’m looking at 3-4 thousand words a night. Since each book usually comes in at 120k, that’s eight weeks or two months for each rough draft.

I started my Payday Stories long ago as a bonus to fan and planned to write short stories about the myths of Ayr; specifically the ones the characters mention in the books themselves. It was a great idea… that sort of petered out when the rubber actually hit the road. However, there’s a reason to actually write these stories, as in they’ll add a bit of extra flavor to book four for the fans (all three of you).

So between books three and four I’m going to do a book 3.5 that’s a collection of all the myths from the world listed by when they appear in the books themselves. Again, this is nothing necessary to the series; more of a gracenote that some people might enjoy. I’m guessing this book will be much shorter and only take me a month to complete.

It will also function as a palette cleanser between books three and four. As in I plan to rough draft three then dive straight into the rough draft of the myths book. Soon as that’s done in hopefully a month, I’ll have gotten some distance from book three for perspective enough to edit it for a bit. Soon as those edits are good, then it’s off to the beta readers/ copy editor while I launch myself at book four. Soon as that rough draft is done (hopefully another two/ three months), I can then edit book 3.5 and send it to the copy editor before going into book four’s edits.

They say that you need a book out every three months or so to stay relevant in the self-published world, and I’ve been cranking them out every year/ year and a half, which is not great by even traditional publishing standards. However, with this new strategy I pray works, I’ll be able to have those books out with only a three-month window between them. I’ll also focus on advertising for the first time (and maybe a Bookbub attempt or two) since they say advertising isn’t really profitable until you have a third book, and is even better when you have a finished series.

At that point, I’ll be ready to say bye to the world of Ayr for a bit, which means a real palette cleanser will be in order. And since I suffer from an acute case of the writer’s disease in which I only want to dream about the projects I’m not currently working on, I thought I’d dip my toes into a how-to book on worldbuilding. Because after four fantasy books, I will have the hubris to believe I’m an expert on the topic.

I seriously LOVE this pic.

And after that?... well, I’ve heard tell of having a flagship series, which is the one you’re really known for and usually consists of 1 million words or more. To put that in perspective, each book in the Sol’s Harvest series will come in under 120,000 for a total of not even a half-million words. So of course I’ve started adapting an idea I’ve had for over 15 years now that I’ve promised myself I’ll get to someday.

Anyways, that’s it for now. I’ve been using the writing sprint method on this blog, and it’s been pretty great. Usually they take me about two hours and come in between 600-900 words. This one’s been 1250 and has taken me only 30 minutes. Who knows: Maybe if I can keep at this schedule I can finish the rough drafts of series by the end of the year?

But then again, my favorite joke is: How do you make God laugh?

See you folks again in August…

Worldbuilding For Fantasy Fans And Authors